Wageningen University & Research centre in the Netherlands was have published details of their second their second round of experiments growing a variety of crops in simulants of Mars and Lunar stimulants. Ten crops were harvested, including Tomatoes, peas, rye, garden rocket, radish and garden cress. 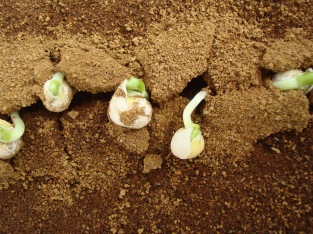 Both stimulants were provided by NASA, so should be pretty near the mark.

The results were unexpectedly positive, especially when freshly cut grass was added to the soil to add nutrients and aid drainage. The Mars results especially showed statistically similar results to the Terran control sample.

One important difference, though. The soil samples contain heavy metals such as lead, arsenic and Mercury, which if they find their way into the food produce, would make them a little hard to swallow (!). Nevertheless, this is very interesting news for potential Mars Farmers

The third stage of the experiment will be focused n food safety, including ensuring that these heavy elements don’t poison future colonists. This will be a crowd funded project